More than 50 Overdoses Have Occurred in May

The Oneida County Overdose Response Team (ORT) has issued its second overdose spike alert this month due to a significant increase in overdoses.

As of May 27, the County’s Overdose Detection & Mapping Application Program (ODMAP) has detected 51 overdoses in May. Year-to-date, ODMAP shows an average of 29 overdoses per month, which puts May’s number 72% higher than the 2022 monthly average. There have been five drug-related deaths for May and 26 year-to-date.

This current spike is also reflected in an alert received from the New York State Department of Health’s Electronic Syndromic Surveillance System (ESSS) which monitors the different types of overdoses seen in hospital Emergency Departments (ED) across the state and alerts counties to any grouping of overdoses that are significantly larger than expected in a geographic area in a 21-day time span. The ORT uses ESSS to complement its ODMAP program which captures law enforcement overdose reports. ESSS detected a cluster of 35 ED drug overdoses in Oneida County hospitals from May 5 to 23.

“This surge in overdoses is extremely concerning,” said Oneida County Executive Anthony J. Picente Jr. “Our surveillance programs show not only an uptick in overdoses, but also a significant increase in the number of Narcan doses administered for overdose events, as well as intel suggesting there is a potent purple heroin circulating in the region. With the holiday weekend approaching, and the possibility of an increase in recreational drug use, we want to warn people of these dangers and remind them to take action to reduce risk of fatal overdose by seeking treatment and harm reduction resources like naloxone.”

ODMAP indicates an increase in Narcan doses needed to reverse an overdose which may be an indication of the presence of a more potent opioid such as fentanyl or fentanyl analogs (drugs designed to mimic fentanyl, but with a slightly different chemical structure) in the drug supply. Year-to-date, there has been an average of 13 overdoses a month requiring at least two doses of Narcan. So far, in the month of May, there have been 27 total, which is 93% higher than the monthly average. At least 10 overdoses required four or more doses of Naloxone.

The ORT encourages people who use drugs, their family and friends and community members to:

The ORT reminds the community of the Good Samaritan Law which says that a person who in good faith seeks care for himself or someone experiencing a life-threatening emergency will not be charged or prosecuted for a drug- or alcohol-related offense including possession of drug paraphernalia, with some exceptions.

The Oneida County Opioid Task Force (OTF) is launching its Project “Save A Life” campaign to expand access to Naloxone (commonly known for its brand name Narcan) by distributing FREE overdose rescue kits with two doses of Narcan nasal spray to as many public places as possible including businesses and community organizations.

The objective is to help laypersons to recognize signs of an overdose, understand how easy it is to administer Narcan nasal spray and encourage its use as a basic first aid tool.

Click HERE to learn more about the campaign and how you can get your FREE "Save A Life" Overdose Rescue Kit! 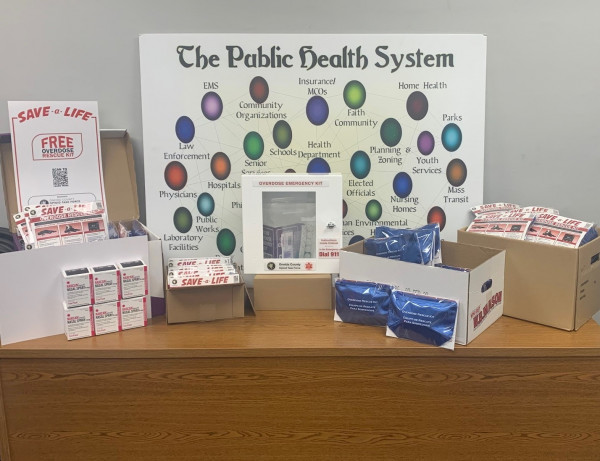